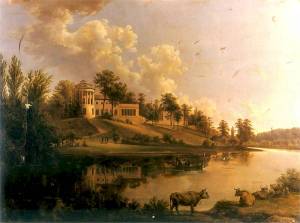 The Dzieduszyckis Palace in Zarzecze was founded by Magdalena z Dzieduszyckich Morska. The initial design was drafted by Magdalena and Józef Tabaczyński, while the major project was created by Chrystian Piotr Aigner, a Warsaw architect. The palace was built in the Empire style. The fundaments were laid in August 1817, and in February 1819 Magdalena had her first guests invited to an official breakfast.

At the southern corner of the palace there’s a round tower in the Roman style. A greenhouse is attached to the eastern part of the building. Interior decoration was designed by Magdalena. Wall decors were made by Fryderyk Bauman.

Thanks to Magdalena, Zarzecze was, along with Łańcut and Przeworsk, a centre of social and cultural life in the region. The front part of the palace served as a ballroom.

The Romantic park in Zarzecze was designed and organized by Magdalena z Dzieduszyckich Morska in the beginning of the 19th century. Magdalena brought exotic flowers, bushes and trees. She reshaped the Mleczka river, creating ponds and an artificial island.